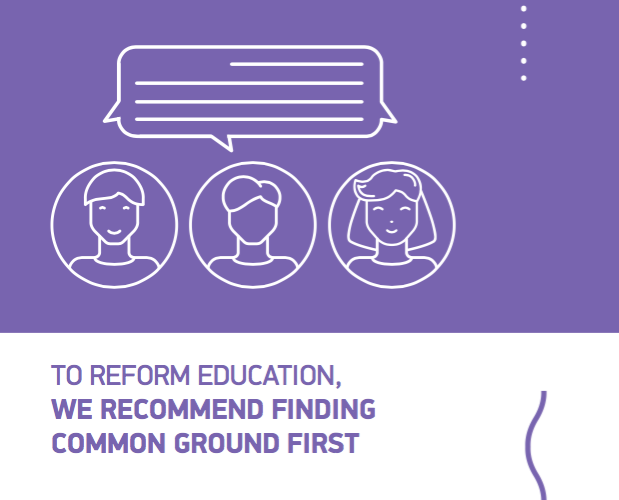 As long as education is used as a stage for political conflict, its promise to build our common future cannot be fulfilled. We need a radical change in our approach to education following the elections coming up for the president and the members of the 27th Parliament. It is only a matter of years before the window of opportunity created by the high percentage of youth in the population expires. It is now critically important for Turkey that political parties come together at the table and provide political consensus for common goals in education.

In the campaigning for elections, what we need to hear from the candidates is a firm promise that they are willing to develop reasonable solutions with other leaders, in a patient manner, to challenging problems for all of us, regardless of individual, societal or geographical differences, instead of proposals of radical changes to education. As an increasingly polarized society, and as an educational community that is tired of constant reforms, we need to hear promises of an environment where all stakeholders are included and heard while making decisions.

The educational dream built around the idea of “Republic 100+” should be realized and as a first step to this, the Turkey’s National Educational Strategy 2020-2030 should be developed. Plans should not be implemented before all the challenges are thoroughly understood and their effects evaluated beforehand. Data should be prioritized in governmental decision making.

The fate of school children should not be a state of unpreparedness for the world awaiting them. Teachers who demonstrate strong self-confidence in trying to change the fate of children by doing everything within their power should be supported and empowering them should be a priority. In education, we need to focus on strengthening schools. Candidates should promise to work to narrow the gap between our country and the world, and also between our own schools.

By working together around commonly shared educational goals that we determine as a country under the guidance of the goals set by the United Nation’s Sustainable Development Goals for 2030, we can create a success story. We would first, however, need to create a structure that is based on the founding principles of the Republic of Turkey, that feeds off of its gains, that uses its strengths to its advantage, and that has foresight about the future and acts accordingly. To achieve all this, we do not first need educational reform, but rather, to put common mind into action. This is the biggest opportunity awaiting the new government to be.

As Education Reform Initiative (ERG), before each election, including the one that will be held on June 24, 2018 and which will determine the president and the members of the 27th parliament, we share with each candidate our suggestions with regards to education based on our comprehensive studies.